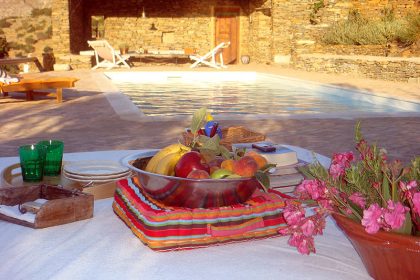 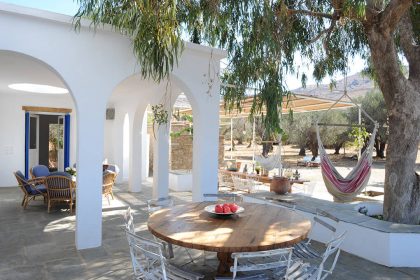 Andros is seriously unknown in the UK, very few tourists go there from England, an island with no airport it is only really for the more intrepid (and some might say more interesting) traveller.

It is in the Cyclades group of islands, just 2 hours by ferry from the port of Rafina near Athens (less by hydrofoil). It is extraordinary that it is so unknown.

The island is famous for its white villages, stunning turquoise sea and beautiful hills reminiscent of New Zealand or Scotland.

Wealthy Athenians adore to go there where they can get away from it all. Greece’s yachting fraternity can crew up and be sipping ouzo in the shade before you can say Captain Corelli’s Mandolin.

For peace and quiet, and a sense of being miles from anywhere, Andros can’t be beaten.The beaches are superb - from long sandy strands to small coves. There are monasteries aplenty and villages with fragant tree-lined streets to explore.

The Sariza wells are natural wells and much of the bottled water on Andros come from this local place. If you like your tipple stronger try one of the local wines, there are lots of vineyards on this fertile island. The famous local dish is "froutalia" which is an omelette with sausages. Kleftiko and meatballs are also favourites as well as all the glorious fresh fish that come in daily.

Andros is made for walking, with a gentle combination of mountains & valleys. The valley floor where goats wander & wild fennel grows, is rich with streams, mint, burst figs, hawthorn & oleander. Numbered routes criss-cross the island, marked with daubs of red paint every few metres. You really can’t go wrong.

Batsi, with it’s maze of narrow lanes & white steps has many chic cocktail bars. There is also an open-air cinema showing films in English.

SO much choice! The Sariza spring at Apoikia where the water comes out of a lion’s head. Palaeopolis, the ancient capital built into a steep hillside. The 10th Century monastery of Panachrantou - by the 19th Century 300 monks lived here - now there are only 2.

Those that like a bit of a challenge, with no direct access from the UK you fly to Athens and then on via Rafina. Ferry or hydrofoil, this is a great destination for the intrepid. And once you arrive you won’t be disappointed as there are amazing walks, great ancient artefacts as well as some fabulous swimming, snorkelling, fishing and sailing.